If Mesh is the most versatile passing concept in our offense, then Counter-Trey would probably be the equivalent in the running game. It is another variation of "Double-Down Kickout", but it is very effective from a spread set.

It is a very simple concept for the linemen to execute, and you can dress it up and give it multiple looks in the backfield. I am all for any play where the linemen have the same job to do up front, but the backfield action can change. Counter-Trey is a perfect example of that. 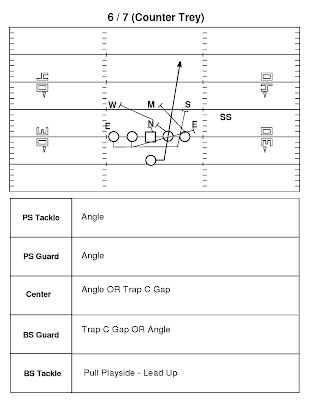 To the playside we are working to build a wall. We like to double-team at the point of attack. Our rule for the playside TE, Tackle, Guard, and Center is ANGLE. They are on an angled path in the opposite direction of the play. Anyone who crosses their face, they take. If we can get a double-team, we want them to have four hands on the down linemen, and four eyes on the linebacker on their path. One of them will come off and take him.

The backside guard will pull and trap the last man on the line of scrimmage. If he is trapping right, he should hit with his right shoulder. If the end squeezes, the guard will "log" block him and set the wall by reaching him (a log blog).

The only exception to the backside guard and center's rule is if the guard has someone in his gap opposite the play.

Against. a 4-man front, you usually see a shade to one side and a 3-tech to the other. Ideally we would like to run it towards the 3-tech side. If we are running it to the shade's side, then the guard would have a man in his gap (the 3-tech) and he therefore can't pull to trap. We would then pull the center and have him trap, and the backside guard would angle block the man in his gap.

The backside tackle will pull and lead up on the playside backer. He should work to make sure his shoulders are square on the linebacker. It is very similar to ISO, just with the tackle leading instead of a fullback.

There are over a dozen variations you can use with this scheme. You can use fakes and misdirection to get it to virtually any ball carrier within five yards of the center. We have had the RB, QB, FB, and Slot Receivers all carry the ball on this play. I like to figure out who our most explosive player is, and come up with a way to get him the ball on Counter-Trey. Here are some examples: 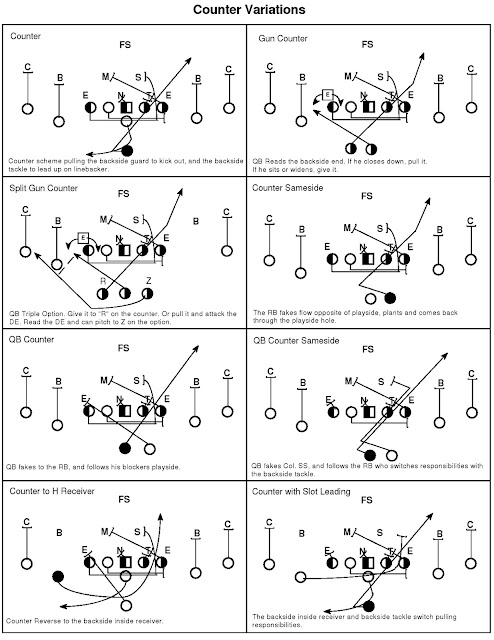 Here are some cut-ups from this year (powered by Hudl):

Here are some more cut-ups from my previous school. We ran Counter-Trey from multiple looks and formations:

What coaching points do you have about the Counter-Trey? Do you have other variations that you like to use? Please feel free to comment below!
Posted by Court Allam at 2:16 PM