That was the sign that greeted approximately 100 coaches to the first Hudl Meet-Up that took place at Blue Valley West High School in Overland Park, KS on April 19th, 2011.

Hudl is the industry leader in sports video editing software. Two months ago, I wrote about their iPad app which is a game-changer for all coaches.

Just last week, Hudl released an update to the app which solves the problem of downloading film to the iPad for the times when you don't have an internet connection. 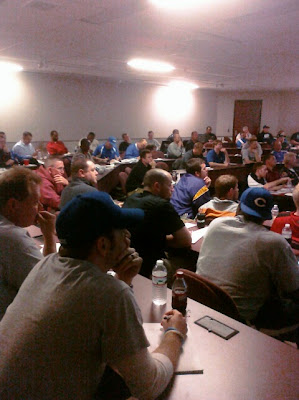 The Hudl crew provided pizza and soda to start the evening. Kim Burnham from Hudl organized the event and introduced the speakers:

1. Coach Nolan Hochgrebe from Blue Springs High School spoke about how they structure their week with Hudl.

2. Next up, I presented "The Quick Game: Ninja Style" You can read about it here.

4. Kim Burnham closed out the evening by talking about upcoming updates from Hudl and answering questions from the audience. She told us that there is a new video uploader in beta testing right now, as well as continual updates to the iPad app. In fact, there is now an entire team devoted just to the iPad app.

For a couple of years, Hudl was one of the best-kept secrets around. I was reluctant to tell coaches from other schools about it because I felt like it gave us a huge competitive advantage. The secret is now out. It was great to be in a room full of coaches sharing ideas about how to get better by using video and technology. I want to thank Hudl for putting this together. Hopefully it becomes an annual event here in Kansas City.

They worked on their "Diamond" formation that became popular last season. This is a great analysis of OU's package from the "Offensive Break Down" Blog.

Here are two new wrinkles that I saw Oklahoma State working on during practice: Power with the back kicking out instead of the backside guard pulling, and outside zone that looked more like inside zone. 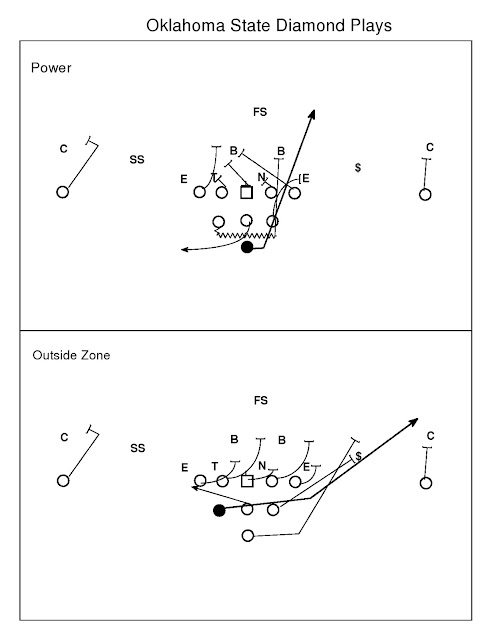 I attended the Oklahoma State University Football Coaches Clinic last weekend. The clinic talks were good, but the best part of the day for me was watching OSU go through a spring practice at the end of the clinic. There were two reasons why I was looking forward to it:
Here are my observations from watching practice:

1. Here are the offensive and defensive practice schedules for the day.

2. Practice started with the offense going through a walk-through of their team script plays vs. offensive players as the scout defense. No helmets or shoulder pads. The coaches were coaching and correcting a ton during this time. One assistant told me that this takes some time away from their meeting time, but they do this so they don't have to stop and correct during team time at the end of practice.

3. The segments were controlled by a scoreboard timer in the corner of the endzone. The home team "score" showed what period they were in. The timer counted down. An air horn sounded to start the next period. The coaches were moving from drill to drill based on this timer, but they weren't married to it. At one point, Coach Gundy was personally running a 1-on-1 lineman drill and it ran a minute or two over the time for that segment. The manager waited to start the timer until he was finished running the drill.

3. After the walk-through, the entire team came together to do dynamic and static stretches. The QBs warmed up on the other field by just playing catch and basic warm-up throwing drills.

4. They did not do Settle and Noose drill. In fact, I did not see Mesh at all. 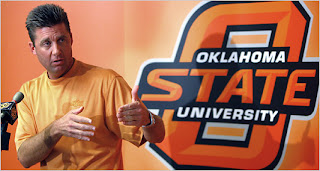 5. The QBs and RBs worked a good drill after individual where they just worked on the swing/check-down route. The RB lined up in the Pistol or offset, and ran his swing to the numbers where he settled. The QB went through his progression and threw the check-down to the RB. This was a huge emphasis all day.

6. Pat and Go was 10 minutes long. They threw for 5 minutes to the right, and 5 minutes to the left. They threw a quick slant, quick screen (foot fire) and fades. I didn't see a huge emphasis on the WR squeezing the numbers or working on the over-the-shoulder fade. The fades were at full-speed.

7. Routes on Air was very standard to all Air Raid teams. Five quarterbacks throwing to all receivers. One difference: They didn't use pop-up bags. Instead, the coaches/managers stood where the secondary would be and gave different looks/alignments.

8. The primary routes they worked on during this practice were: Snag, Shallow (Y & H), All-Curl, Quick Screen, and Jailbreak Screen.

9. At the end of 1-on-1 time with the receivers and DBs, the offense lined up in trips on the 5-yard line vs. two defenders (outside linebacker and corner). They threw their quick screen to #2, and #1 and #3 had to block the defenders. It was live to the ball and they got after it.

10. Everything was no huddle. I spent a great deal of time watching the communication system they had. The coach on the sideline signaled in the play. The QB was the only one really looking at the signals. He yelled out the play to the OL, and gave a quick signal to the receivers, and they ran the play. The signal from the QB to the receivers was very quick and simple. The QB said to the line "23.. 23.." and that was it. They were very sharp with their communication.

11. During team they were working situations. Since it was spring ball, the first offense was going vs. a scout defense while the #1 defense was on the sideline. After several plays, they switched and the #1 defense came on. They may have been doing that since high school coaches were there watching, but it didn't appear that they were game planning at all for opponents, just working on doing what they do.

12. "Game Time" at the end of practice was a 4-minute offense/defense situation where the #1 offense was against the #1 defense. They put 3:40 on the clock and the offense needed to get a first down to win. They got it to 2nd and short, and the defense called a timeout. On 3rd and 2 the offense converted, but Coach Gundy called holding on the offense, which put them in 3rd and 15 or so. They ran a jailbreak screen, but didn't get it. It was a highly competitive and spirited session.

13. From what I could tell, all of the numbered routes from the Air Raid were the same.

14. They ran their "Diamond" 3-back formation a little. Outside zone, inside zone and power.

One interesting play: They motioned the back who was lined up to the left of the QB over so he was directly behind the RB on the right. Then they ran Power with the entire line blocking down. The back to the right of the QB kicked out the end. The back who motioned over led through (instead of pulling a guard), and the QB handed off to the back lined up in the pistol. It was like an I-Formation lined up to the QB's right, but giving the ball to the back lined up behind him. It was a nice wrinkle, and a way of overloading that side of the defense.

If you have any specific questions, please post them in the comments below!
Posted by Court Allam at 6:28 AM 6 comments: 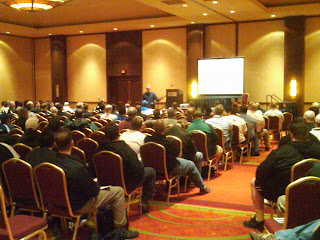 I believe that coaches must be excellent teachers in order to be successful. It is extremely challenging to bring a large number of student-athletes together and motivate, instruct and get them to buy into a common vision in order to win games. Sure you can have great athletes and still win games, but in order to win championships you must be a great coach and teacher.

We know that coaches can teach players what they need to do. What I have found discouraging are the instructional strategies coaches employ when they are giving clinic presentations to a room full of coaches. It amazes me how many outstanding and successful coaches use teaching techniques that would never be effective with students in the classroom. 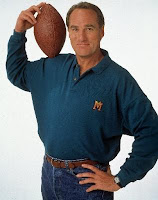 I realize there are many constraints that coaches are working under when they are giving a clinic talk. They don't want to give away "secrets" to competitors in the audience. They only have an hour to talk. I have given clinic talks before, and I know that speaking in front of your peers can be one of the most frightening things ever.

As teachers, we intrinsically know effective strategies when we teach students. However, that does not always translate over to when we are teaching our peers. I began thinking about what I would like to see in clinic presentations to make them more effective. I also brainstormed some things that coaches should try to avoid doing in clinic talks, but we have seen far too often (or been guilty of ourselves).

Don't:
Do:
Finally, here is an excellent blog called "Speaking about Presenting" that has great articles about creating effective presentations. The ideas are applicable both in the classroom and in presentations. I highly recommend it.

As always, please add your comments below. What are other coaching clinics do's and don'ts that you would add to the list?